Russia attempts to build a nuclear carrier. Try not to laugh. 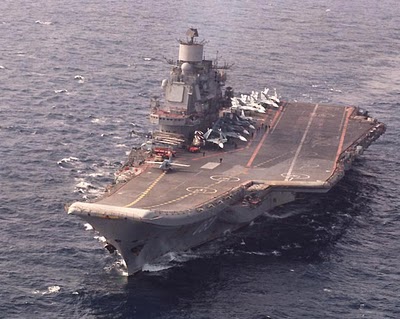 Just when I was sick of the hype surrounding Shi Lang, China’s first attempt at naval aviation, I discovered that Russia is working towards building its first nuclear-powered carrier, capable of sustained operations at sea, by 2023.

This is, of course, the same Russia that’s managed to build a grand total of 24 Su-33 naval strike fighters and 12 Su-35 air superiority fighters since the end of the Cold War.  (Sadly, Russia’s military-industrial complex is the only organization in the world that makes America’s defense industry look productive)

And let’s not forget that Russia, traditionally one of the weaker maritime powers, has but one carrier, perennially plagued by maintenance problems.  Not to mention, the crew of the Admiral Kuznetsov–with half the fighter compliment of an American Nimitz carrier–seems to be decades behind the United States in training.

Though the United States has an unprecedented advantage in fleet carriers, perhaps we might benefit from “light carriers“, equipped for littoral missions or humanitarian assistance.

US Army Aviator, Military Blogger. Self-described as a "Pocketful of Awesomeness". Does not represent the views of the Department of Defense.
View all posts by Crispin Burke →
This entry was posted in Uncategorized. Bookmark the permalink.

This site uses Akismet to reduce spam. Learn how your comment data is processed.